Ian Marshall: Becoming a member of the Seanad makes me a stronger unionist

IAN Marshall is not the first man from Markethill to become a member of the Seanad. A relatively close neighbour is Seamus Mallon, the former SDLP deputy leader and deputy first minister, who was appointed as a senator by Charles Haughey in 1982.

Marshall has a lot of time for Mallon, who he says has lived in the predominately Protestant Co Armagh village, which is at times festooned with Union flags, for most of his life.

What he hasn't a lot of time for is himself. Though now to be found in Dublin at least half the week, he also has a senior post at Queen's University Belfast where he is business development manager at its Institute for Global Food Security.

Mondays and Fridays and sometimes part of Tuesdays are for Queen's, before he heads off for three days of Seanad business, often sitting late on Wednesdays, then back home to help run his farm.

"I never go to bed the same day I get up," he jokes. "I don't want to retire; I would prefer to spontaneously combust."

Although coming up to his 50th birthday, and insisting he rarely feels tired, he does get a bit of a rest at weekends, albeit while also working on the family diary farm which he has run for some 32 years, with son Sam (21) now taking over the main duties.

It is almost a year since he took up his Seanad seat and he regards his main achievement as "still being there".

Marshall fractured his pelvis in four places in a serious road traffic accident 23 years ago on the main Armagh to Newry road when a car pulled out in front of his motorbike. A Catholic friend, who worked at a nearby filling station, gave him the last rites.

But it was a nurse who was first on the scene and administered initial first aid who he believes may have saved his life. He named his youngest daughter, Sarah (19), after her.

"I was eight weeks in hospital. It put everything into perspective. You look at life very differently after something like that," he tells me. 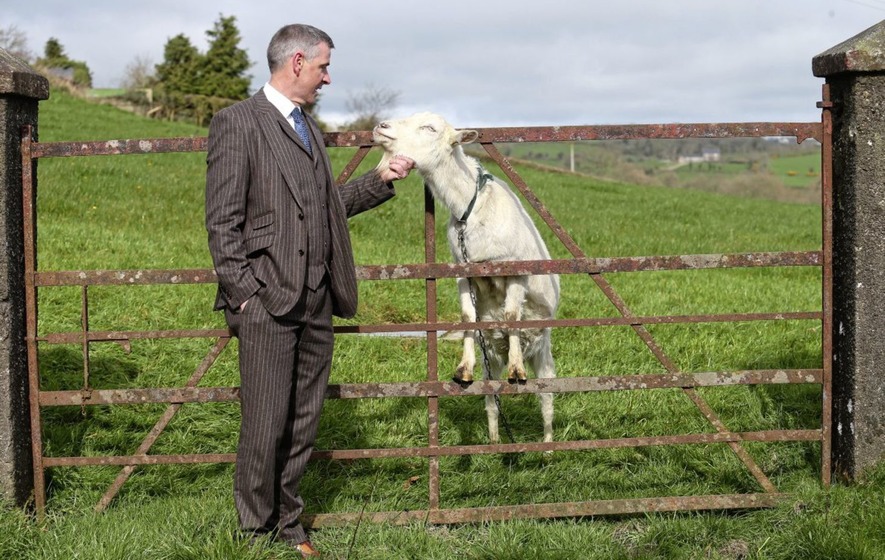 'When I am down there, I still feel a very strong unionist. In some ways, even more so.' Picture by Mal McCann

Marshall comes across as an atypical unionist. His family never hung the flag out, even during the 'Twelfth fortnight' and when, as a perhaps more taciturn teenager, he asked his father why, he was told: "We don't need to do that to show we are unionists".

Along with Mallon, he campaigned to keep open some relatively small local Catholic maintained schools. He has little interest in political parties and even less over 'orange and green' politics.

He believes Arlene Foster should be in Leinster House regularly, along with Michelle O'Neill, and that Taoiseach Leo Varadkar should be in Belfast even more often than he is.

Yet he was initially suspicious of the approach about joining the Seanad, the upper house of the Oireachtas, which came from the then European Commissioner for Agriculture and Rural Development, veteran Fine Gael politician Phil Hogan.

Marshall feared he was being used as a "token", or a "pawn" and that the timing, amid talks to restore the Stormont executive, would be tricky. But after a few exchanges with Varadkar, he felt reassured.

"I like him," he says now of the Fine Gael leader and youngest taoiseach to date. "In fact I think Fine Gael have a very strong team. I had coffee with the taoiseach and he told me that at partition in 1921 the Senate had 30 Protestants and 30 Catholics, for fairness and balance, but that is was missing that perspective now.

"But when I am down there, I still feel a very strong unionist. In some ways, even more so. And I don't feel uncomfortable."

While still belonging to the Presbyterian Church, Marshall does not attend Sunday worship regularly and is not a member of the Orange Order. But he has raised his head above the parapet into northern party politics.

He fell foul of the DUP, in particular, over Brexit after an appearance on the BBC Northern Ireland politics show The View when he accused Sir Jeffrey Donaldson of being "disrespectful" and getting the UK-EU withdrawal agreement "horribly wrong".

Lagan Valley MP Donaldson, criticising agri-food sector leaders in the north, had said: "I don't believe they have read the detail of this, they have not read the 500 pages. There are serious constitutional and economic implications of this deal for Northern Ireland."

Marshall, a former president of the Ulster Farmers Union, hit back: "It's completely disrespectful to imply that those individuals tonight haven't read, or don't understand, this piece of work. I think he's got it horribly wrong."

"When I am in Dublin, I can look back at the bubble of Northern Ireland politics and see how toxic and charged it is, with a lack of leadership."

Privately both senior DUP and Ulster Unionist figures had voiced support for Marshall going to Leinster House, but insisted they could not do so publicly.

Marshall is not just anti-Brexit, he is very pro-Europe, believing the original ambitions in establishing the then EEC in 1957 – ensuring security of food supplies and averting future wars – have been fulfilled, along with a strong track record on human rights, animal welfare, the environment and business. If the bureaucracy had become too cumbersome, that was being examined, in his view.

He sees the basic problem of Brexit as the fact that it is built on ideology, a throwback to imperialism even, and he supports a second referendum.

"Brexiteers say the referendum has not been respected but it has been completely respected. For almost the last three years, which is a reasonable amount of time, MPs have attempted to implement it but they have demonstrated in trying to do so that Brexit is not good for us.

"They argue too that a second vote is anti-democratic but it is absolutely democratic to change your mind. The UK is completely divided – families, and communities – and if it is going to be healed you are going to need leadership."

Despite misgivings, Marshall took part in a west Belfast Féile event focussed on anti-sectarianism. He said he can "respect" the republicanism of Mary Lou McDonald, the Sinn Fein president.

"I said to Mary Lou that for people like me, having been born in 1968 in south Armagh and living during the Troubles, Irish republicans were seen as anti-Protestant and anti-British, compared to her middle-class upbringing in south Dublin," he says.

Married to Lesa (the family is completed by 22-year-old daughter Laura), Marshall enjoys his music, naming U2 among his best-loved artists – and The Joshua Tree as his favourite album – along with Mumford and Sons and Michelle Shocked. He enjoys reading and movies and is a big fan of BBC Radio Four.

As we leave his farmhouse, he says he is optimistic about the future "for two reasons".

"Firstly, youth. In the same way as, growing up, I would have seen World War Two as the stuff of history and Hollywood, my kids and their generation regard the Troubles that way, and I think we will see that coming through.

"Secondly, women. Women have always been the glue which has held Northern Ireland society together and I believe they still are."